Question from a reader about my last project learning post:

I love the idea of this, but somehow whenever I mention turning an interest into a more involved learning opportunity (particularly for putting on a transcript in my oldest son’s case) it suddenly becomes uninteresting and too “schooly”. I try to maintain a “hands-off, teen-directed, interest-led” approach with me just suggesting materials, and asking for documentation on what is done, but that doesn’t even seem to work. An interest in video making is still just an interest (with a bit being done with friends here and there just for fun). And an interest in the history of 20th century music (which I thought could make a great elective for the transcript) hasn’t gone beyond “Okay, I’ll think about it.” How do I motivate him to turn some of these interests into more without killing the interest itself? Does that make any sense? Any suggestions?

How To Nurture a Project
Step One: Hold a meeting with your teen to discuss the overall plan for the project. Talk about things they are interested in trying or investigating. I have found it best to start with a general plan and then be open to changes as you go along.

Step Two: After a week or two of investigating, make a concrete plan outlining what is expected from the teen, writing down as many details as possible. The plan should include the goal of the project (which can change as you progress), the materials and resources needed, and a guess as to the length of the project. My experience is there is no straight path with project learning but every twist and turn in the direction of the project can be a learning experience. I have learned to embrace the changes, recording the work that was accomplished.

Step Three: Make a deadline. I find it always helpful to make a initial deadline for each step in the project. Of course, these can be adjusted as you see the need but without any deadlines…our projects always seemed to take longer than expected and sometimes I just had to put an end to it so we could be done for the term or when we had all lost interest and the project had completely stalled. I found that if I kept good records of what was done for a project that I could gather the bits and pieces into a “course” for the transcript.

My experience with our official projects:
Videography – This one was so hard to nail down. We would meet and make goals and then realize we needed more resources. I was unfamiliar with the software so when they were stuck it took a long time to get unstuck since we were all learning. In the end, I assigned some deadlines to videos they had started and that seemed to motivate them to finish.

Baking – This was a loosely planned project and I found adding in new kitchen equipment would inspire new learning. I needed to be on top of the ingredients needed or the recipes didn’t get completed. I would ask on Monday what was required and then make sure to have it by Friday for him to use in his baking.

Astronomy – I felt like we were taking baby steps each week, changing paths so many times to find a way to make this course work, and in the end I had to assign out the material and then let the information just mature in his brain. We are still working on this “project” with monthly visits to the observatory. It become more of a school subject than a self-driven project.

Robotics – This was the one course that I had sort of a guide to what the steps should be for the project but I was not skilled in knowing how to help the boys in working through problems so I had to rely on them to find their own answers. Sometimes I felt they took too much time but I had to trust they were working the best they could. In the end, the struggles were the best way to bump up their learning since they did have to reason, test, and redo their projects many times before they were successful. 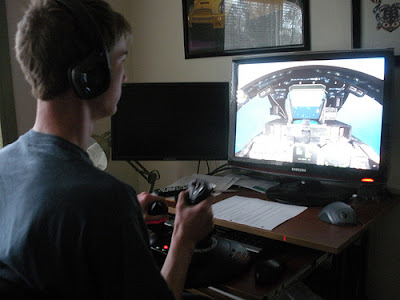 Aviation – Mr. A totally took this under his own direction. He found materials, classes, videos, and outside mentors to facilitate his interest. My job was to record what he did every week after talking to him and viewing his various projects. I also was needed just to purchase the materials he needed to create his models and remote control projects.

My Conclusions
Project learning reminds me of when I wanted to learn to knit…it sounded fun. I loved picking yarns and I was excited about the patterns but the actual sitting down and knitting part was boring and I didn’t have the patience. I saw this with some of the projects that my boys started and I had to allow room for changing the project or letting it evolve into something else. Project learning is still work and it takes effort. 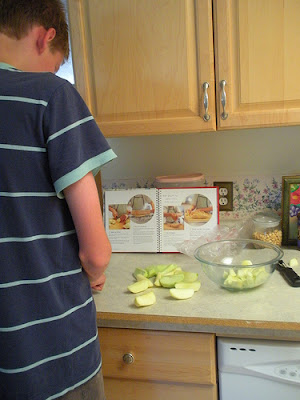 Best Tip I Can Offer
Keep writing down on a weekly basis all the project learning that is accomplished and try to categorize it into course titles. I have been able to mold some of these topics into courses that will end up on Mr. B’s transcript and some will not.

You can read more about my thoughts on Project Learning here on my blog.
You may also like to read this entry on Camp Creek Blog: Project Journal – Parents